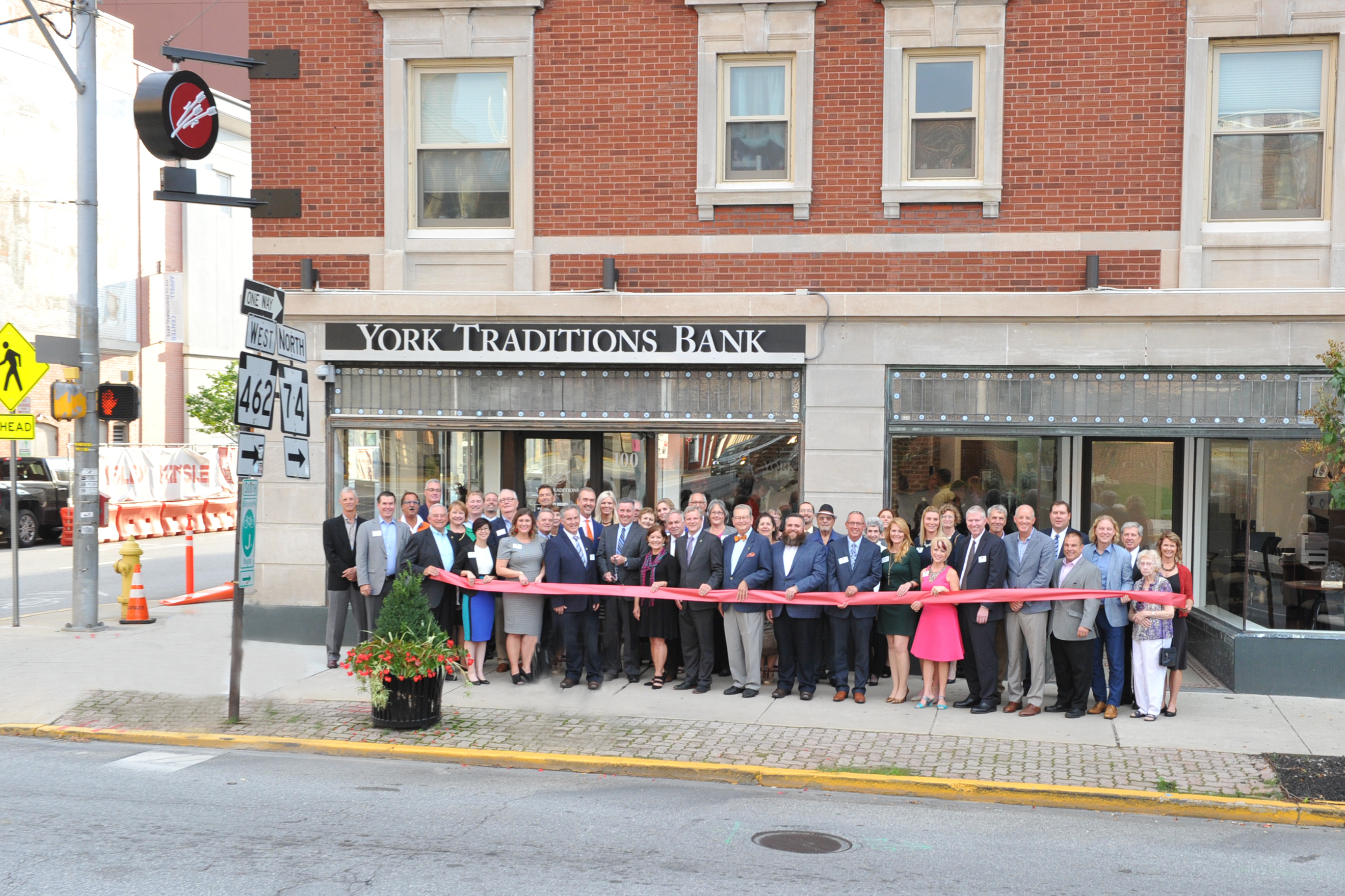 Representatives from the York community join the management of Traditions Bank for a ribbon cutting ceremony on the afternoon of Tuesday, October 2, 2018 at the site of their new Downtown York branch at 100 North George Street.

Traditions Bank has added a new address to its list of retail locations — 100 North George Street in York City. The Downtown York office is situated on the first floor of the historic structure originally known as the Haines Hotel, built by Mahlon Haines in 1925.

The Bank’s sixth retail branch offers a full suite of personal banking, business banking, and residential mortgage services, along with a 24-hour ATM. The branch is managed by Jim Coombes who joined Traditions Bank in February. Mr. Coombes has 25 years of experience in the banking industry and has worked in the Downtown York area for over 18 years.

The 2,000-square-foot space, which includes both the 100 and 102 North George Street addresses, was completely gutted and beautifully renovated, paying homage to the past while incorporating modern materials and technology.

During its Grand Opening festivities, Traditions Bank has been sharing the story of the Mahlon Haines (1875-1962), “The Shoe Wizard.” Haines may be best known for constructing the Shoe House in Hellam, a large shoe-shaped structured which can be seen from Route 30. His thriving shoe business included 50 stores in PA and northern MD, six of which were located in York City.

Besides building a successful business, Mr. Haines was equally respected for building the community he loved. He was a generous man and regularly gave back to his customers, employees, and neighbors. To honor the history of the building and Haines legacy, the branch has been holding a shoe drive to benefit LifePath Christian Ministries.

An official Ribbon Cutting for the Downtown York branch was held on Tuesday, October 2. York City Mayor Michael Helfrich and Downtown Inc CEO Silas Chamberlin thanked the bank’s leadership for investing in downtown and the future of York City.

Founder and Chairman Mike Kochenour remarked to the gathering crowd, “Since the beginning of the bank, we’ve been committed to contribute to the growth and success of York City. Our vision has always included a brick and mortar location downtown. We are so proud to be a downtown neighbor in the true sense of the word.”

The branch sits on the corner of North George and West Philadelphia Streets, next to The Appell Center, York County Courthouse, and York’s finest restaurants, and close to Central Market. “We could not have chosen a more perfect location for our downtown branch, “ said President and CEO Gene Draganosky. “Just like Mahlon Haines, we love York’s architecture, its culture, and its people, and we are passionate about making a difference in the community.”

The public is invited to attend an Open House on October 5 from 5 to 9 p.m. during First Friday. Visitors can enjoy refreshments, spin the prize wheel, meet the team, and tour the branch.