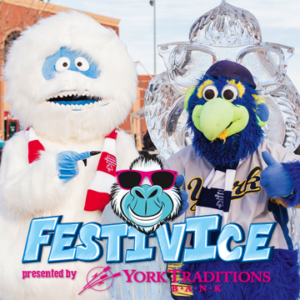 Traditions Bank and Eventive, the events division of the York Revolution, have announced plans to relocate the first-of-its-kind ice festival known as FestivIce from Revs Stadium to the heart of downtown York two years ahead of schedule.

FestivICE will run from 11 a.m. to 4 p.m. on Saturday, January 16 on Beaver Street and Cherry Lane in the “Market District” of downtown York. It’s a winter ice festival with live ice sculpting, live music, food and children’s entertainment. The tagline “Laugh At The Cold” lived up to its name last January as temperatures dipped to a crisp 22 degrees with over 1,000 attendees enjoying the inaugural FestivICE.

“We’re excited to be a part of FestivICE again this year. Our seventh Polar Plunge is coming up and our goal is to increase the number of people plunging and the dollars raised. Special Olympics York County is funded entirely by contributions from the community and there is no paid staff — we depend on our volunteers and local suppors to help provide a year-round program with 17 different sports for over 350 athletes in York County,” said Krista Gardner of Special Olympics York County.

This is a free admission community event. Amusement tickets for the kids will be three dollars each or purchase a wristband to enjoy all of the children’s attractions for eight dollars. One dollar of every ticket and two dollars of every wristband will be donated to Special Olympics York County. Tickets and wristbands will be available on the day of the event.

“Last year was the test for FestivICE and it proved to be a huge success for our community,” said Adam Nugent, Director of Eventive. “We wanted to see if Yorkers would come outside in freezing weather to laugh at the cold with family and friends. It turns out the test exceeded our expectations and a project that was meant to spill into the heart of downtown in three to five years will make its debut on Beaver Street and Cherry Lane in 2016.”

For more info, check in at FestivIce.com.