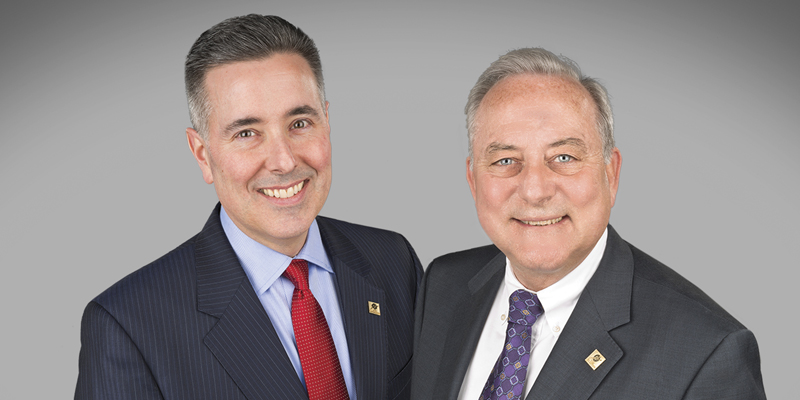 Gene Draganosky, President (left) will assume the CEO title from Mike Kochenour (right), Founder, Chairman and CEO as of January 1, 2017. Kochenour will remain as Board Chair and serve as Advisor in 2017.

Traditions Bank (OTC Pink: YRKB) has announced that the succession plan put in motion last year will move into its next phase with the turn of the calendar year.

Michael E. Kochenour (pictured, right), a Founder of the Bank who has also served as CEO since its 2002 inception, will turn that title over to Eugene J. Draganosky (pictured, left) effective January 1. Draganosky was named President in April 2015. Kochenour will remain as Chairman of the Board of Directors. He will also serve in a key advisory capacity with the Board and executive management for all of 2017, which will assure continuity for Associates, Customers, Shareholders, and the entire Community.

“From the day Traditions Bank opened its doors, our vision for this organization extended far beyond my service here,” said Kochenour. “In fact, one of my most important duties as the Bank’s leader is to help plan for my successor. The long-term success of any organization is only maintained through careful succession planning. Our goal is to serve our hometown as an independent community bank far into the future. We owe it to all of our stakeholders to perpetuate strong, local leadership.”

Kochenour is entering his 45th year in the banking industry. He helped build Traditions Bank from the ground up, overcoming many challenges, the most significant being the 2008 recession and its lingering effects. Now approaching $375 million in assets, 110 Associates, its headquarters and five branches in York County, and ongoing investments in technology to serve client needs, the Bank is poised for continued growth under Draganosky’s leadership.

With over three decades as a York County banker, Mr. Draganosky has extensive leadership experience and has served in numerous senior executive and community volunteer positions. He joined the executive team at Traditions Bank in 2008. Throughout those eight years, his oversight and scope of responsibility have continued to expand. “I’m looking forward to guiding the organization through increasing technological and demographic changes while maintaining the culture and customer experience that makes Traditions Bank unique,” said Draganosky. “I’m very fortunate that I will have Mike’s continued support as Chairman and Advisor.”

Traditions Bank’s eleven-member Board includes Kochenour, Draganosky, and nine local, independent Directors. Paul Kilker, President of Kilker Holdings, Inc. and Board Vice Chair, notes that the new dynamic puts the Bank in an ideal position. “We’ll be moving toward the next decade with a Chairman who still has a tremendous amount of energy and wisdom to offer and a President and CEO who brings the perfect combination of youth, experience, and knowledge of this community. We are excited about the future.”