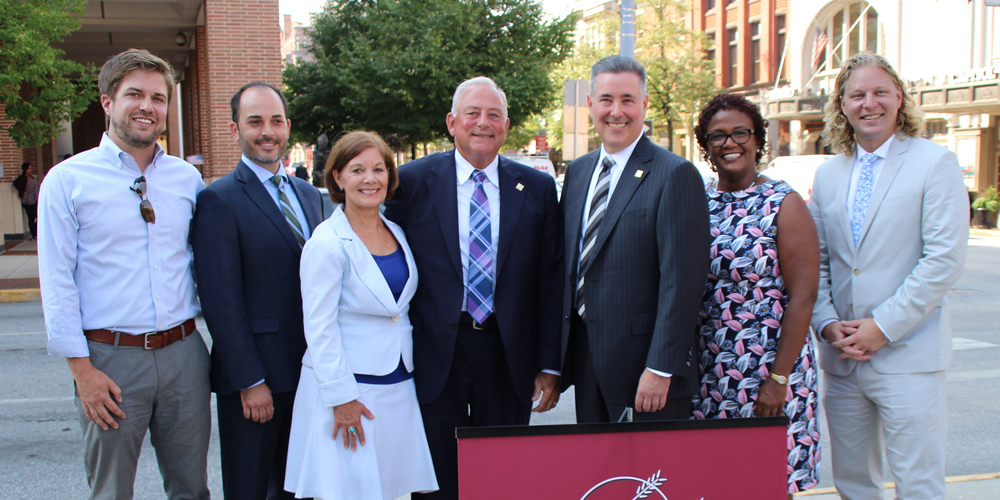 Bank’s sixth branch will be on the corner of N. George and E. Philadelphia Streets

On August 22, Traditions Bank announced plans to renovate and open the organization’s first branch located in downtown York. Subject to customary regulatory approvals, the new, more than 2,000-square-foot York City branch will be located at 100-102 North George Street and is anticipated to begin serving customers in by September 2018. Traditions Bank President and CEO Eugene Draganosky, and Founder and Board Chairman Michael Kochenour, announced the location of the new branch, along with York City Mayor Kim Bracey and York County President Commissioner Susan Byrnes.

“Today’s announcement is an answer to our customers who want easy access to our services conveniently located downtown,” said President and CEO Gene Draganosky. “We are honored to make this long-term investment in York City as a part of our continued growth to serve the individuals, businesses, and organizations that make this community strong.”

Renovations to begin later this year

Traditions Bank will begin renovation of the new branch location late in 2017. The downtown branch will require the addition of up to five new Associates. Many will be cross-trained as universal bankers, or professionals who are qualified to serve varied customer needs including transactions, account openings, and loan processing. This approach provides the opportunity for Traditions Bank team members to build comprehensive customer relationships.

“My administration is enthusiastic that Traditions Bank has decided to locate their first downtown York branch on the corner of West Philadelphia Street and North George Street,” said Mayor Bracey. “The addition of a Traditions Bank branch in downtown York is a tremendous benefit for residents, visitors and those that work in our downtown.”

Downtown has always been part of the Bank’s vision

Traditions Bank opened its doors in 2002 with 13 associates and one branch. Today, there are over 115 associates working among five retail branches and an administrative headquarters. The sixth branch will be ideally situated close to the York County Courthouse, the Appell Center for the Performing Arts, Central Market, busy restaurants, offices, art studios, and other attractions.

“Opening a York City branch has been a part of our strategic vision from the very beginning,” said Founder and Chairman Michael Kochenour. “As a local bank committed to this community, the downtown is important to us because it’s important to York.”